A heart attack, medically known as a myocardial infarction (MI), is a condition where a portion of the heart muscle dies due to inadequately blood supply. It is one of the most common and most serious heart conditions to affect people over the age of 45 years. The heart is basically one large muscular pump. If a portion of the muscle wall dies, then it cannot pump with the same force. In other words the heart function is compromised. Depending on how severely this function is affected determines the outcome. In severe cases, a person can die minutes after having a heart attack.

GET MEDICAL COVER
Choose the right cover for your budget

Even though the heart handles freshly oxygenated blood, it has its own channels for receiving this oxygen rich blood into its tissues. The coronary arteries, right and left, take some of the newly oxygenated blood as it is being sent throughout the body to supply the heart muscle. Considering that it is working throughout life, the heart muscle needs an adequate amount of oxygen in order to continue functioning.

The problem usually arises when the coronary artery becomes narrowed. Most of the time this occurs due to fatty plaques that build up in the wall of these arteries. This is known as atherosclerosis and can occur in any artery in the body. When the coronary arteries become narrowed, it is known as coronary artery disease (CAD). It is one of the main reasons for a heart attack. A single or both arteries and its branches may be narrowed at one or more points along its course. This limits the amount of blood being supplied to the heart.

Causes of a Heart Attack

The narrowed arteries of the heart does not immediately lead to a heart attack. It is however, the main contributing factor to a heart attack. There may be no problem when the heart is beating at a normal rate. However, during times of physical or emotional stress when the heart needs to be faster, it may not be able to receive enough oxygen-rich blood through these narrowed arteries. Eventually a blood clot can form when one of these fatty plaques burst. The blood clot then completely blocks the narrowed heart artery. 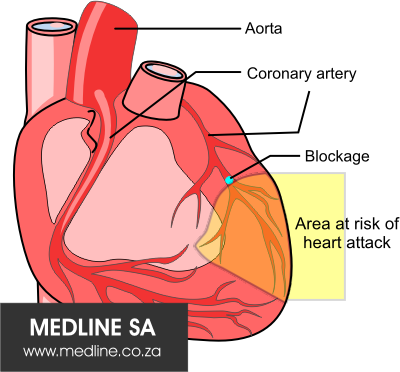 People over 40 years of age are generally considered to be at a high risk of a heart attack than young people. But as the modern diet and sedentary lifestyle has become widespread, people are having heart attacks in their 30s and even as early as the 20s. You are at a greater risk of having a heart attack if either of your parents or siblings had one. But the family history is also associated with hypertension (high blood pressure) and hypercholesterolaemia (high blood cholesterol). In fact hypertension and hypercholesterolaemia are now considered two of the main risk factors for determining which people are more likely to have a heart attack.

Being overweight or obese, a sedentary lifestyle and cigarette smoking are three other major risk factors. Diabetics, people who abuse alcohol, use of illegal drugs and stress are other important risk factors. It is important to remember that risk factors simply means that you have a greater chance of having a heart attack. It does not mean that you will definitely have one. Some of these risk factors are modifiable meaning that you can change it. But other like genetics are non-modifiable in that it cannot be changed. Therefore a person who is considered at high risk of a heart attack needs to undergo routine screening and follow a healthy lifestyle to minimise the chance of having a heart attack.