Ringworm is a common term throughout the world to describe a type of fungal infection of the skin. But it has nothing to do with worms. Instead fungi are a type of microscopic organism that tends to live on dead material, similar to the mould that grows on old bread. The ringworm fungi have a predilection for human skin specifically just as other species can affect animals. The surface of human skin is made up of dead cells filled with a protein known as keratin. Healthy skin is able to withstand infections but sometimes a fungus can infect it and live on the surface. These types of fungi are known as dermatophytes.

GET MEDICAL COVER
Choose the right cover for your budget

Why is it called ringworm?

Dermatophytes are one type of fungi. It is not the only group of fungi that can infect your skin but it is the most common type. Fungi are not parasitic worms, like those that may infest your bowels. Dermatophytes cause a characteristic skin rash that is circular in shape. The outer borders are slightly raised and red with the centre containing dry skin or sometimes even normal skin. This ring-like appearance of the skin rash has given rise to the name ‘ringworm’. 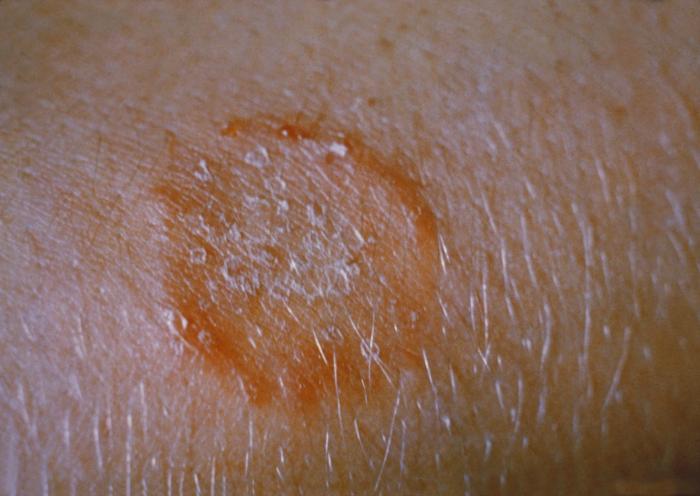 Picture of a typical ringworm skin infection from Wikimedia Commons

Contrary to popular belief, there is no worm lying deep under your skin. In fact dermatophytes do not invade living tissue. It only consumes the outermost layers of human skin which are essentially dead. These fungi have special enzymes that allows it to digest the hard protein in the outer skin and consume it as a source of food. In this way the fungi can live for years and even decades without causing a serious disease in the human host. But it can cause an allergic reaction which may produce a number of symptoms beyond the typical ringworm that most of us know.

Dermatophyte infection of the skin is known as dermatophytosis. When it affects your fingernails then it is known as onychomycosis. However, there are more specific names for ringworm infections depending on the part of the body that is affected.

These are three most common sites of dermatophytosis. But it can affect skin and nails anywhere on the body. These fungi can even consume the hair, since the strands are made up of keratin just like the skin. Here are the other areas where a ringworm infection can occur, with the proper medical term.

You may have heard of tinea versicolor but this is not a dermatophyte (ringwom) infection. Instead it is caused by another type of fungus.

Is there a cure for ringworm?

Dermatophyte infections are treatable and even curable. There are a range of antifungals in the market that are very effective. Some are available over-the-counter (OTC) while others need a doctor’s prescription. These antifungals can be applied on the skin in the form of gels or ointments (topical antifungals) or it can be taken internally as a tablet or capsule (oral antifungal agents). Although ringworm infections are stubborn and takes weeks or months to treat, it can eventually be cured. Just as important as the treatment is to follow preventative measures to avoid contracting the infection again.

Always speak to a doctor about your ringworm infection and get proper medical treatment. Trying to use a hot pin or scrubbing the area with a rough object to “kill the worm” are not effective. In fact,  In fact it can worsen the infection and lead to serious complications like a bacterial infection. Fungal infections are common in South Africa where the hotter climate and higher fungal spore count in the air means that it can affect anyone. It is not a matter of personal hygiene. One of the more common fungal infections, athlete’s foot, is often contracted in showers particularly at a gym or other public facility.

One thought on “Ringworm Skin Infection Is Not A Worm”